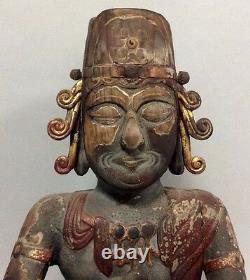 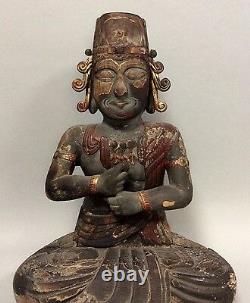 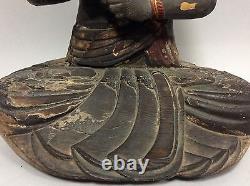 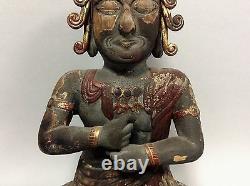 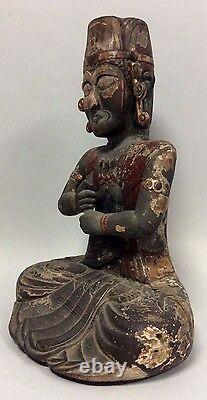 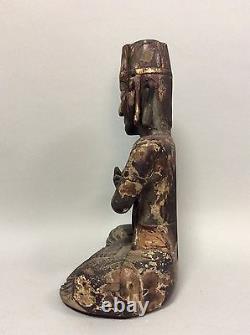 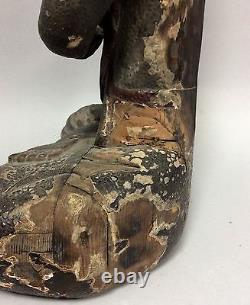 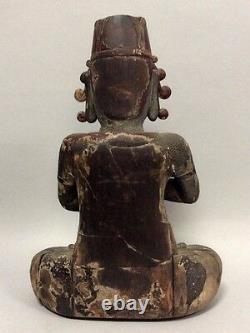 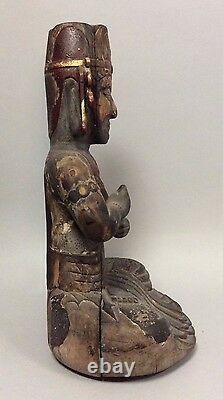 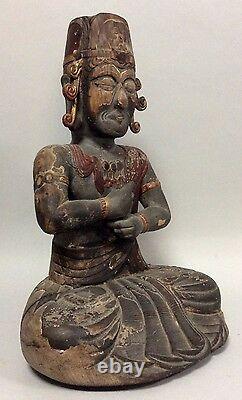 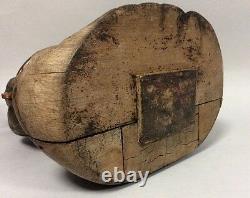 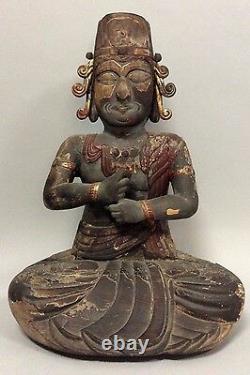 Rare, early and ornate depiction of Buddha (Dainichi Nyorai) Statue. Museum-worthy, cultural-asset, hailing from Japan. 13-14th Century piece (Kamakura Period). Perfect size at 18 inches tall (46cm) x and 13.5 inches wide (34cm). Wood with colored lacquer and polychrome paint; Subsequently lacquer-gilded most likely. This piece may have once been a temple piece. Most of the paint loss on the piece is evident as touch-wear. This piece as been heavily adorned by admirers for hundreds of years..

Impressively against the odds, the fragile hair-curls remain intact.. The bottom most "block-base" of this item makes it appear as if the Buddha is meditating his way to flotation.... And raises the skirt of the piece approximately a quarter inch.

Evidence would suggest this originates from southern part of Japan i. The Ryukyu Kingdom (Japanese: Ryky koku; Middle Chinese: Ljuw-gjuw kwok; historical English name: Lewchew, Luchu, and Loochoo) was an independent kingdom that ruled most of the Ryukyu Islands from the 15th to the 19th century.

The kings of Ryukyu unified Okinawa Island and extended the kingdom to the Amami Islands in modern-day Kagoshima Prefecture, and the Sakishima Islands near Taiwan. Despite its small size, the kingdom played a central role in the maritime trade networks of medieval East and Southeast Asia. Built by Yozegi Sukuri technique or joint block construction. A major carving technique introduced in the later half of the 10th century was yosegi-zukuri. Up until then, statues were carved from a solid block of wood using a technique called ichiboku-zukuri. The new yosegi-zukuri technique reached its apogee with Unkei (1148 - 1223 AD). Instead of using one solid piece of wood, Unkei and his team carved the statue in a piecemeal fashion from partially hollow blocks of wood. First, the individual body parts were carved roughly and separately. Second, the pieces were assembled, and only then, thirdly, did detailed carving begin. This new method had various advantages. Not only was it faster, allowing several artists to work in tandem on different parts, but also the final sculpture was much lighter than one carved from a single block of wood. And, in the centuries that followed.

The prefabricated nature of the individual body parts allowed temples to quickly repair or replace damaged or destroyed body parts -- e. Placing the undamaged head of an older statue (whose body was ruined by fire or earthquake) onto another statue whose body was still in good repair. Some Japanese sources say the yosegi-zukuri method was introduced in the later half of the 10th century, due primarily to the lack of large trees and a growing creative impulse to create gigantic statues of the Nyorai and Bosatsu.

Many other Japanese items from my collection for sale. The item "Museum-Quality, Antique, Japanese Wooden Sculpture-Statue of Buddha 13th Century" is in sale since Friday, July 21, 2017.

This item is in the category "Collectibles\Religion & Spirituality\Buddhism\Statues & Figures". The seller is "cosmic_goods" and is located in Freeport, Maine.

This item can be shipped worldwide.